Everybody plays. From the newborn just discovering “peek-a-boo” to the college student rediscovering hacky sack on the quad and to grandparents playing with their grandchildren, play is an almost universal human experience. For policy makers, urban planners, and designers, play is, on the one hand, an established part of the urban landscape—cities have set aside park space and playgrounds since the start of the Industrial Revolution in part to escape the harsh realities of the city. More recently, though, play has taken on a life of its own in cities, escaping from set-aside parks and playground and taking over the old warehouses, campgrounds, and shopping areas.

A panel discussion and charrette hosted by the Tourism Club at the Harvard Graduate School of Design (GSD) on Friday, March 9, explored the changing role and meaning of play and the implications of this change for urban planning, urban design, and policy. 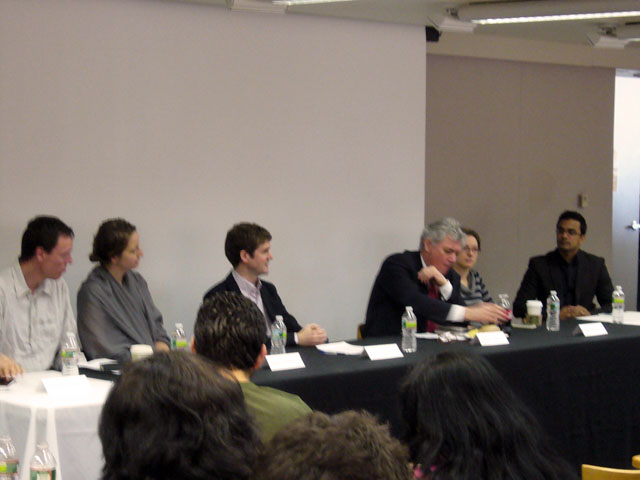 In a discussion moderated by Prof. Brent Ryan of MIT (author of the recent Red Ribbon Commission Report (PDF) on Central Square), six panelists shared perspectives from the arts, public policy, history, city government, and digital media to explore how play will influence our cities in the future. Beyond the role that play should have in our cities broadly and Cambridge specifically, the panelists discussed three critical questions: What is the relationship between ‘play’ and ‘rules’ (put another way, between ‘order’ and ‘disorder’)? How does the right to play relate to the right to a space? And how should money (financing, economic growth, fair and equal access, etc.) be related to play?

The panelists highlighted new tools and new forms of urban experimentation changing the way we play in cities today—from skateboarding, street performers, educational games and public art (like the Bumpkin Island Encampment) to new virtual tools like the location-based app SCVNGR (where two of the panelists—Anish Kattukaran and Kellian Adams—used to work).

Scott Lang, former Mayor of New Bedford, highlighted how that city embraces its diverse population through frequent cultural festivals (open to all). He also highlighted the fine line for government officials between imposing order and allowing for play—such as designating specific areas for skateboarding and graffiti to limit these activities in other places. Megan Dickerson discussed her work with the Boston Children’s Museum and with her own installations, from an extremely popular spy game to a Willy Wonka-themed scavenger hunt and a temporary artist takeover of one of the Boston Harbor Islands. All of these examples emphasize a point raised by Cesare Birigiani: “play” as it occurs in the city, from scavenger hunts to festivals and installations, is a temporary experience. This fact gives play a very valuable quality in our experience of cities like Cambridge, tying fun memories—the sense of excitement at solving a clue or the thrill of watching fireworks on the water—to a physical location.

As Megan Dickerson said, play in the city fosters this sense of discovery, and “a touch of the surreal” amidst the otherwise mundane urban space. Look no further than Beverly’s recent piece on the Pooh House for a glimpse of the love Cantabrigians have for playful spaces. So how do you play in the city? Stay tuned in the coming months for more about the role of play in cities, public policy, the arts, and more. And follow the GSD Tourism Club on Twitter @playcityGSD, on Facebook, or on their website.