Killing In Our Name: "Law, Security, and Liberty after 9/11: Looking to the Future"

Killing In Our Name: "Law, Security, and Liberty after 9/11: Looking to the Future"

It was a conference of, by, and for those interested in the deep details of national security law and presidential power. The words used were the technical language of lawyers. But make no mistake. This was a conference dedicated to examining how our government surveils, detains and kills in our name.

"Law, Security, and Liberty after 9/11: Looking to the Future", a conference hosted by the new joint Harvard Law School/Brookings Institute Project on Law and Security, brought scholars, advocates, government officials and the interested public together for a day and a half of reflection and debate in Cambridge. The highlight of the first day was a rare address from Deputy National Security Advisor for Homeland Security and Counterterrorism, John O. Brennan. Described by other attendees as one of three times the Obama administration has offered a comprehensive outline of their counter-terrorism policies, Brennan offered the core principles that forms the framework of administration policy:

Brennan went on to describe the nature of the conflict we're in, noting that there is some disagreement as to whether the conflict, and thus the laws that govern it, are limited to the "hot battlefields" of, for example, Afghanistan. Brennan continued:

Because we are engaged in an armed conflict with al-Qa’ida, the United States takes the legal position that — in accordance with international law — we have the authority to take action against al-Qa’ida and its associated forces without doing a separate self-defense analysis each time. And as President Obama has stated on numerous occasions, we reserve the right to take unilateral action if or when other governments are unwilling or unable to take the necessary actions themselves.

He went on to emphasize the legal basis of the actions the Obama administration has been taking as well as how its conduct conforms with norms of international behavior.

Brennan, to the surprise of many, took questions from the floor. The most pointed question asked Brennan about how he felt about the rule of law in 2001-2003 when he was at the CIA and it engaged in "enhanced interrogation" techniques. Brennan noted that he was not in the chain of command but made his objections known. He acknowledged that he could have resigned as a matter of principle but said that he felt that he had a job to do. The same questioner also asked Brennan whether accountability for past actions including "enhanced interrogations" were part of the rule of law. Brennan responded by saying that there had been and continue to be investigations of what had occurred. The administration believes, Brennan continued, that people who acted on a good faith belief that their actions were legal should not be prosecuted, but, if their conducted exceeded what was thought to be legal, they should be prosecuted to the full extent of the law.

Panel discussions on Friday and Saturday focused on topics such as the ethics and law of domestic and international counterterrorism and the power of the presidency. Across these various panels a number of different themes emerged.

Setting the stage for a conversation about the state of our nation, Philip Heymann, former Watergate prosecutor and long time government official, compared what our government was authorized to do to its own citizens in August 2001 versus what it can do now. What could be done was limited to search and seizure on granting of a warrant, detention through arrest and trial for what you had done or conspired to do. All these things were "event triggered" by reasonable cause. Further, since the Vietnam war, police functions and intelligence and military functions were kept very separate. Now, however, we've come to accept that the President can detain and kill Americans without trial and we're well on the way to having built a "surveillance state".

A theme returned to by a number of panels, was how we, as a nation, "ratchet down" from our state of heightened response. Ben Wizner, Litigation Director of the ACLU's National Security Project, noted that the end of the war on terror is, at best, a "distant abstraction." Later, Stephen Carter of Yale University put it more bluntly. In the practice of war, he said, one side must know what it can do to have the other side stop killing them. What's the "surrender point" in this war, he asked. The consensus from panelists seemed to be that in an environment of constant threat, our dysfunctional political system makes ratcheting down impossible. Any politician who had advocated for a downward ratchet would be pilloried if and when a new attack succeeded. As Wizner put it, while there hasn't been a successful attack in the last 10 years, our politicians behave as if there has.

In response to a question, panelists struggled to come up with ways to prevent even a further "ratcheting up" should there be a future successful attack. One suggested giving Guantanamo back to Cuba, eliminating the temptation for its further use. But, as another panelist dryly responded, Cuba would likely require it to be emptied of detainees first, something Congress had made impossible. Philip Heymann talked about public education and a rational framework for evaluating threats and risks, but that wasn't embraced by other panelists. Most described this as "depressing". 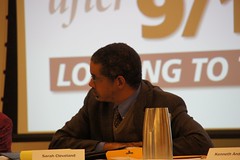 The US use of drones - unmanned aircraft flown remotely - for "targeted killing" was another topic that weaved its way through the various panels. Stephen Carter again discussed them most pointedly, noting that their ease of use, the fact that they lower the risks and thus the profile of war, makes them most troubling. But the discussions of drones could not be straightforward because present and former officials who know of the drone program are not permitted to acknowledge its existence. When Brennan was asked directly about the program, his response was that he could neither confirm nor deny the existence of a covert program, though his speech was very much about the framework in which the government operates the drone program he could not acknowledge. John Rizzo, who spent 35 years as lawyer in the CIA, tied himself in rhetorical knots trying to advocate for greater transparency for a program he, too, could not acknowledge existed. 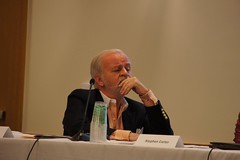 Another point made throughout the conference was that policies that had been uncontroversial for the Bush administration have become flashpoints for the Obama administration. Brennan noted that trials of terrorists in civilians courts had been national policy with a long track record of success. Now, though, the administration faces an amendment attached to the Defense Authorization bill mandating the trial of terrorists in military tribunals. Brennan noted that, in this case, Congress would be tying the hands of the professionals in government to use all the mechanisms at their disposal. Even conference participants who advocated for the use of tribunals seemed a bit stunned by this development. While they had thought that military tribunals should be an option used more often, never once in their advocacy had they imagined that they be mandated. Participants were hard pressed to find an explanation other than pure, cynical partisanship.

There was also continuing discussion about whether Obama administration policies represent a continuation of Bush administration policies. This was made most strongly by Jack Goldsmith, a staunch conservative, who quoted a long passage from Glenn Greenwald, a noted left wing critic of Obama policies, to that effect. Goldsmith holds a special place in the history of the rule of law because of the behind-the-scenes revolt he led by a number of high placed Department of Justice lawyers protesting what they saw as the constitutional excesses of the Bush policies. This revolt, which included a famous standoff at the hospital bed of a critically ill John Ashcroft and a threat by the lawyers to resign, forced President Bush to overrule Vice President Dick Cheney and reign in warrantless wiretapping.

It was left to closing keynote speaker Charlie Savage, Pulitzer Prize winning New York Times reporter, to put the conference in a larger context. Savage addressed the apparent continuity in policies from the Bush to the Obama administration. First, Savage noted that there was a great difference between early Bush policies and late (post Goldsmith revolt) Bush policies, that the worst of the abuses had been shut down before Obama came to office. Second, Savage observed that the objections to Bush policies took two forms. There were those who objected because of the flouting of the rule of law and those who objected based on a human rights/civil liberties perspective. Those disappointed in the Obama administration mistook Obama's objections which were based on the rule of law, not on civil liberties. If one reads Obama's campaign speeches carefully, it should not be a surprise that he has extended the practices of the latter Bush administration and in some cases expanded them, all the while finding bases in law that the Bush administration just ignored.

Savage closed by emphasizing the importance of open discussions and arguments between lawyers. The way our government is structured, these debates happen in secret, and citizens can only infer what has happened only much much later. These legal debates are the policy debates of our time and should be held in the open.

A detailed live blogging of the conference can be found at Harvard's Lawfare blog.

(Video as recorded by the Lawfare blog)